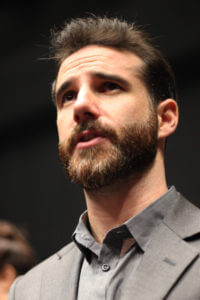 Since graduating the Gaiety School Of Acting in 2011, Tiernan Kearns’s stage appearances include HOW TO BE ANGRY (Nominated for Best Ensemble & First Fortnight, Fringe 2017). I WAS AND EMPEROR (5 stars). THE LAST CRUSADER (….’a scene stealing cameo from Kearns’ – Irish Times). THE CARVED SOUL (Nominated for Best Production, Fringe 2014). Tiernan also produced, wrote and performed in EXTINCT in Theatre Upstairs (….’hopefully we will see a lot more of Kearns’ bold work’ – Irish Theatre Magazine).

Tiernan also featured in the award-winning production RTÉ CENTENARY. Other television credits include Terry in the RTÉ/CBBC series ROY.

Tiernan will be participating as an actor in The 24 Hour Plays in aid of Dublin Youth Theatre supported by BNP Paribas Real Estate.

Introduce yourself please. You can even describe yourself in the style of a chat show host describing your whole complex life in two sentences if you are feeling like a life-affirming challenge.

A man who doesn’t care if you like pineapple on your pizza or not, because life’s too short and he’s gluten intolerant. Actor, Writer, Philanthropist, Tiernan Kearns.

Have you participated in The 24 Hour Plays in aid of Dublin Youth Theatre before? If yes what is your fondest/ most nightmare causing memories? If no what are you looking forward to/ terrified of?
I’m really looking forward to the whole process. Working with new people is always enlightening and walking on to that stage with the knowledge that audience and performers alike are 100% complicit in the act is refreshing. Sometimes there’s a denial on one or both sides that it’s all just made up, but not here, everyone knows that everyone knows, you know? That’s liberating. Terrified doesn’t come in to it…….yet.

When you were a teenager what was your greatest interest?
Of course, acting was there but I only discovered the stage at around 16. My main interest that was always, at the very least, humming in the background, was nature and animals. I grew up in the countryside of Wexford on a few acres of organic land, near a small river, surrounded by tall trees, horses and hundreds of species of birds and insects. I’d literally spend hours every day just sitting and observing the rhythms of the place and its inhabitants. There’s few places left where nature thrives and home is one. Whenever I’m there I feel like I’m really standing on this planet. Like gravity is a friend. That and Steven Seagal movies.

If you could work on any film or play with anyone living or dead what production and who would it be? Why?
I do enjoy a good Wes Anderson movie and ‘The Life Aquatic’ is one of my favourites. It grows with every viewing. The level of detail is what draws me in. That’s my kind of working environment. “I need to find a baby for this father.”

If you could time travel would you go forward or back and why?
There’s nothing that has occurred so far that I’d want to go back and change, so I guess I’ll just stay here, see what comes. (Yes. Well let’s see how you feel about that after The 24 Hour Plays: Dublin *rubs hands/ evil grin*)