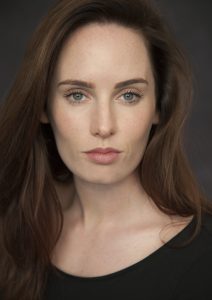 We kicked off by asking Aoibheann McCaul’s full name. We weren’t disappointed. We love the big names here in #24HrDub HQ.

We love it when folks come back to take part in The 24 Hours Plays in aid of Dublin Youth Theatre supported by BNP Paribas Real Estate. It means that which didn’t kill them made them stronger. Not only is the bould Aoibheann McCaul back for more, she also volunteered behind the scenes on the production team last year and at the last minute too. What a super trooper. Apart from #24HrDub you might know her from her work in television on Irish favourites Fair City and Hardy Bucks.  Our featured picture above is a photo taken of Aoibheann as part of photographer Aoife Herrity’s DYT@40 exhibition this time last year.

You were in the 24 Hour Plays in 2014 tell us a little about that experience.

Yes – that moment before stepping on stage, when I realised my Hollywood star cast mate had the intelligence to sneak his lines on as a prop – and I was purely relying on memory…

If you took a notion to write a play what element would you definitely include and why?

One woman (Me) playing many characters – so I could easily tour it, show off dem mad acting skillz, and not be accused of just playing myself and telling my own life stories therefore being able to use lots of my own life stories without offending all those who have inspired said stories.

Dublin Youth Theatre is finally moving house. If you were moving and were only allowed bring one piece of clothing and one book with you, what would they be?

Dressing Gown – Comfy cosy, and I squirrel so much stuff in the pockets, something would be bound to be important, and my recently gifted book, Get Your Shit Together – because that would seem fairly essential in such a hideous time of moving! (OR MY MACBOOK! coz that would be genius cheating?)

Have you worked with children or animals? How did that work out for ya?

Well, the baby cried ALL THE TIME! Took making strange to a new level. I dream of working with animals though!

If you would like to see whether Aoibheann gets to wear an evening gown or a dressing gown onstage at the Abbey Theatre on February 3rd 2019 book your tickets now and support Dublin Youth Theatre.