Our next #24HrDub Creative Team member to chat with us is Morgan C. Jones. He was born in Dublin. He is known for character TV roles in Quantico, Nowhere Fast, (with #24HrDub Alums Alison Spittle and Clare Monnelly) Red Rock, Game of Thrones, Ripper Street, Fair City, Vikings, Penny Dreadful and Frankenstein Chronicles. Film credits include The Guarantee, The Fox, and Detainment which as Will O’Connell, one of our 2019 directors, points out is nominated for an Oscar! 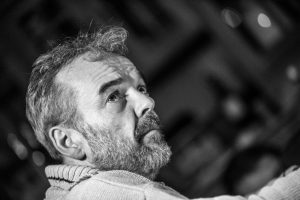 Morgan has also appeared in many plays, musicals, in improv, and as a stand up comedian. He cut his teeth performing and sketch writing on the groundbreaking 90s TV show Nighthawks (RTE) – notable for its cult following, and as the only satirical TV show in history to directly bring down a ruling head of government (Charles J Haughey 1992).

Ironically he returns in April 2019 to Fishamble’s national tour of Colin Murphy’s Haughey/Gregory in which he plays the titular former Taoiseach. Our feature image is Morgan C. Jones with fellow cast member Ruairí Heading playing Haughey and Gregory respectively.

An ambitious multi-instrumentalist. he can clear whole rooms with guitar, piano, bass, ukulele, sitar or harmonica. He lives in Dublin with his wife and 3 youngest children.

YOu can find Morgan online on Twitter at @funnydub and his sites morgancjones.ie and soundentertaining.com

Introduce yourself please. If someone wrote a biography about you, what would it say in the blurb on the back of the book?

Actor, writer, musician, improv, satirist, audio producer, cook, mild OCD. Prefers to play villains. When not working, he can usually be found near a light switch muttering about not being made of money

Where can we find more about you online?

Google? The gardai? My agent Ronnie?

Have you participated in The 24 Hour Plays in aid of Dublin Youth Theatre before? If yes what is your fondest/ most nightmare causing memories? If no what are you looking forward to/ terrified of?

First timer. Looking forward to it. Edgy is good.

If you could give your teenage self a piece of advice what would it be?

Listen. Always. Evaluate, then trust your instincts. Preferably in that order. And for Christ’s sake take better care of that hair you idiot.

What theatrical experience has had the biggest impact on you?

Playing the High Court Judge in a school production of the courtroom scene in The Pickwick Papers when I was 10. I instantly knew rehearsal schedules suited me better than actual school work. I loved being someone else. I was hooked.

Describe the craziest costume you have ever worn. We’ve seen it all in The 24 Hour Plays in aid of Dublin Youth Theatre supported by BNP Paribas Real Estate so go on spill. Nothing will shock us.

Take your pick. A middle aged woman. The Pope. Speedos and sandals on Sandymount Strand filming in December. A robot cab driver from Dublin 2064AD. A cocktail dress with stockings, suspenders and heels….

If you would like to see this Oscar nominated actor treading the boards this Sunday at The Abbey Theatre book your tickets quicksmart!