Back in Ireland and back on The Abbey Theatre stage, Nichola MacEvilly is one of our team of actors this year. We hope her new pup and her jigsaws survive The 24 Hours without her. Oh and word to the wise, Nichola, there is no point bringing your knitting… you won’t have a minute to spare!

Introduce yourself please. You can even describe yourself as your granny would. 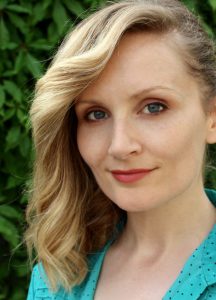 I’m Nichola MacEvilly! I was accidentally born in Cavan but was bread and buttered in Sligo!
I trained at Rose Bruford in London and have an MA from Royal Central School of Speech and Drama. I then continued living there for FAR TOO LONG but am now living and working in Ireland. Yay!

I’ve just finished playing Lady Macbeth which was a fab experience and nearly broke me into a million tiny pieces! I’m fine now.

Have you participated in The 24 Hour Plays in aid of Dublin Youth Theatre before? If yes what is your fondest/ most nightmare causing memories? If no what are you looking forward to/ terrified of?

I’m a 24 Hour Plays first timer and I’m really really looking forward to working with lots of exciting amazing talented people. Some I know, some I’ve yet to meet.

When you think back to yourself as a teenager what change in yourself has been most surprising to you as an adult?

When I was a teenager I was always trying very hard to be different and stand out as ‘individual’. That became really tiresome until I gradually realised that I actually am ‘individual’. We all are. All I have to do in my life is be the truest version of myself. From that point on I never second guessed my feelings, my choices or my preferences. What’s surprising is that that realisation and the confidence that came with it fed into all areas of my life. It helped me accept and understand others better and it really helped me ensure I was never knowingly being taken advantage of or treated unfairly. We’re all different and we all have a right to be here in all our glory on an equal footing. But if you mess with me or the people I love, you’re gonna hear about it!

If you could change one thing about theatre in Ireland what would it be? Woah! #Deep

I am so proud to be at home in Ireland working in theatre. I would like to see an active and dedicated commitment to fifty fifty casting. I do not have the same level of opportunities as my male peers. And that’s simply not fair.

Comedy or Tragedy? Why?

Tragicom. Comgedy. At the moment, post Lady Macbeth, I’m really into comedy. Give me six months I’ll be wondering if anyone wants to do Othello! Although, I do believe they exist alongside one another.

If you would like to see some performance knitting (it could happen!) or, more likely, see Nichola acting as part of our 30 strong cast in six newly minted plays on Sunday 3rd February 2019 at 7pm in The Abbey Theatre BOOK YOUR TICKETS NOW!